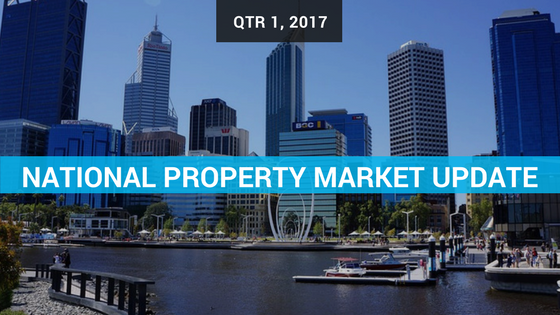 Perth house prices are surely due for their time in the sun again.

The stark contrast in capital growth performance to Feb 2017 continues unabated with capital gains accelerating across Sydney, Melbourne, Hobart, and Canberra. The pace of decline in annual change in dwelling values in Perth and Darwin has, however, decreased.

Annual capital city growth rates across the combined capital cities hasn’t been this strong since the 12 months ending December 2002 when the housing boom in the early 2000’s started to slow.

Sydney’s annual growth rate of 18.4% to Feb 2017 is extraordinary. Since the beginning of 2009, Sydney dwelling values have more than doubled, rising by 104.5%. Meanwhile, Melbourne property values are 87.7% higher. What a contrast this is to Perth’s negative 4.5% year on year annual growth rate!

This situation is reminiscent of a very similar set of numbers in the early 2000’s following the completion of the Sydney Olympics when the eastern states housing markets finally started to lose steam and Western Australia regained momentum. This was following a market high in Sydney in the late 1990’s. If you were living in Sydney at that time, you would probably remember how difficult (almost impossible) it was to buy into the market at a reasonable price as properties were being sold at auction well above expected prices. Meanwhile in Perth at the time prices were very stagnant.

The Reserve Bank has recently voiced its concerns about the sharp increases in housing prices in Sydney and Melbourne. Whilst it has been muted on declining values in Western Australia, it seems there is a dilemma in how to curb growth on the east coast while not further damaging west coast property values.

The good news is that the resources industry in WA today is generally more buoyant that this time last year due to improvements in commodity prices. Further stabilisation in the resources sector will certainly lead to renewed optimism about property values across the State.